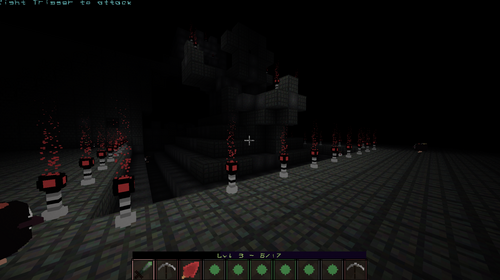 So, I've been steadily adding game content and features this year. I believe I need crafting (a way to generate items from items) as well as enough resources spawned by my world generation algorithms to make the core game-play loop more then just moving blocks around.

Some things that worked well that I made early on was the equipment systems. A layered combining of items (body parts and then gear over the top). But systems themselves don't make the game. I need to add in tiered gear, stats onto the gear and quests that give you the gear.

Dungeons as well needs to be implemented. That will make a more fun approach to slaying monsters and getting loot. Treasure Chests! I made portals early on but had no where for them to go to, just going to each other about 3 chunks away wasn't very fun.

I finally made a day and night cycle. It's very dark at night, probably . Then I added torches that light up the surroundings and particles. I also fixed most of the bugs. I added some basic screen fades and some UI texture frames.

Things I want to add next:

I also need to generate skills with various stats for the game. Currently I've made a list of different skill types I want.